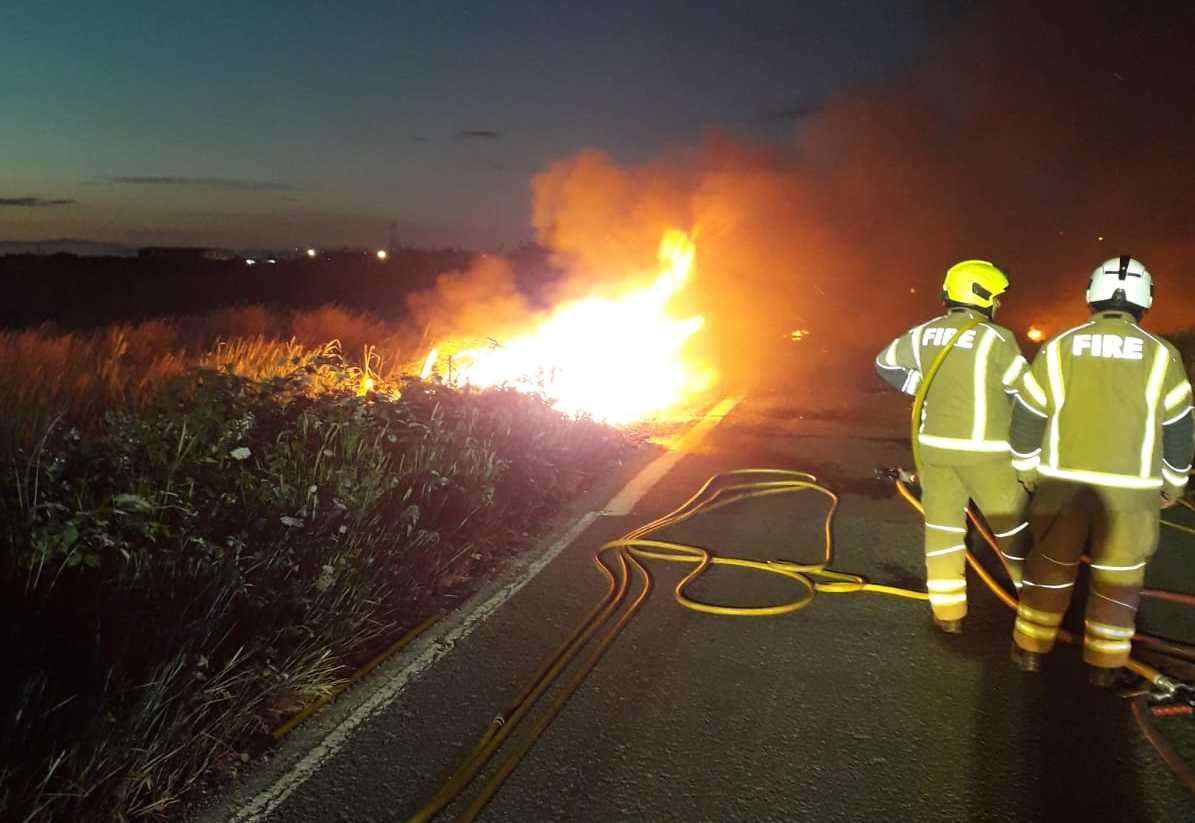 A major builder’s managing director of merchants says his staff and business prospects are at risk due to flammable spills in roadside ditches.

Earlier this summer, firefighters spent nearly seven hours battling a huge blaze that engulfed five hectares of marshland next to the Darent River.

A total of 20 fire engines and approximately 125 firefighters were called to the prairie fire on Ray Lamb Way in Erith.

Two commercial warehouses were destroyed and crews rescued 15 people from the blaze on the hottest day of the year, July 19. No injuries were reported and the cause is still under investigation.

But disgruntled businesses say they have long warned of flammable fly spills along Ray Lamb Way and Wallhouse Road, leading to the Darent industrial estate near Dartford.

They say the brazen dumping of fridges, tires and other items in roadside ditches creates powder keg conditions and is an almost daily occurrence.

Among the businesses to come within yards of the flames was Alsford Timber, which is one of Kent’s largest independent timber merchants with branches in Sittingbourne and Tonbridge.

The managing director of the Ness Road site, Neil Fuller, says fly tipping has since returned and continues to pose huge health and safety concerns.

“I’ve been with the company for almost 15 years and it just got worse and worse,” he said.

“The fly tipping is now encroaching in some places, it’s so dangerous it’s actually forcing trucks and cars to go against the flow.”

The builder’s boss added: “The problem you have is that it’s a busy road to an industrial area with hundreds of journeys being made each day with everything from vans to 44-inch trucks. tons.

“You actually have people going up and down that road too because they have to get to work.”

Before the last big blaze, another huge blaze was reported in the swamp and last month crews were again called to a vehicle found on the side of the road on fire. And previously, fly tipping also caused flooding problems.

“Environmentally it’s a disaster,” adds Neil. “We almost lost our business in a fire at the end of July due to the wild dumps fire.

“There were fires which in some places were caused by fly dumping because the heat sets fire to the oil and everything in the ditches. And it ended within 50 100 meters from our branch, our head office.

But just hours after fire crews cleared the landfills of flies that had burned, they had returned once more, he claimed.

The long-term impact of dumping also reduces the trader’s business prospects and prevents him from recruiting more workers.

Neil added: “From a business perspective, people don’t want to come and work for us and other companies in this field.

“I would say we lose about a quarter to a third of the applicants. On a Saturday or Sunday, people will try out for a night.

“We nearly lost our business in a fire in late July due to the fly dumps burning.”

“They’ll skip all the tips and think what the hell I got myself into? Why would I want to work to come to work in this environment? And they never bother to show up.”

The company has written to its local MP as well as Bexley Council and the Environment Agency.

But the maintenance of the private access road, classified as a bypass, has had a long and complicated history.

As a bypass, the council says it has no responsibilities for land under or beside the paved surface or ditches.

Frustrated by the lack of action, companies such as Alsford decided to take action themselves by investing in their own ANPR camera.

Neil added: “We’ve been talking to Bexley council for the past four to five years to try to pursue to try and set a standard where hopefully people won’t fly in that area and that hasn’t all just didn’t work.”

The company’s chief financial officer, Athol Manning, added that there had been “a lot of money going on”.

‘We’ve had a few meetings and they constantly seem to be fights between the council, the Environment Agency and the Roads Agency over who the problem is,’ he explained.

“Some are just blatant Sunday afternoon people cleaning their house.”

Mr Manning says a few years ago the council set up its own cameras for a weekend only to have vandals take them down a few days later.

“They promised to put them back in place but since then nothing has happened,” he added.

More recently, ownership of parts of the land – which the Land Registry had previously flagged as pending – was transferred to the Berkeley Group.

The homebuilder intends to put forward plans for thousands of homes on the site, it is understood.

“We have had a few meetings and they are seriously considering resolving this issue.

“Is it through bollards? Is it by putting up fences? So it went up a level but again it’s still happening at the moment.

Bexley Council said that in the last 12 months four vehicles had been seized and 31 fixed fine notices (FPNs) had been issued by council officers following regular patrols.

Jane Parson, spokesperson for Bexley Council, said: “At present the public road is maintained and cleaned regularly, with land adjacent to the road being privately owned.

“Unfortunately, this land suffers from regular dumping from unlicensed vehicles and waste haulers.

“Council enforcement officers work closely with the Metropolitan Police and will take enforcement action against anyone found illegally transporting or disposing of waste.

“These issues are not easy to resolve due to different land holdings, but council and landowners have been exploring preventative measures over the past few months.

“At present, these plans are still under consideration, but it is hoped that they will have a positive impact on the level of waste crime in this area.”

A Berkeley Group spokesperson said: “This is a long-standing issue. We are working with representatives from the adjacent Darent Industrial Estate Task Force, LB Bexley Highways, the local ward councillor, the Environment Agency and the Met Police to explore potential solutions to help prevent fly tipping .