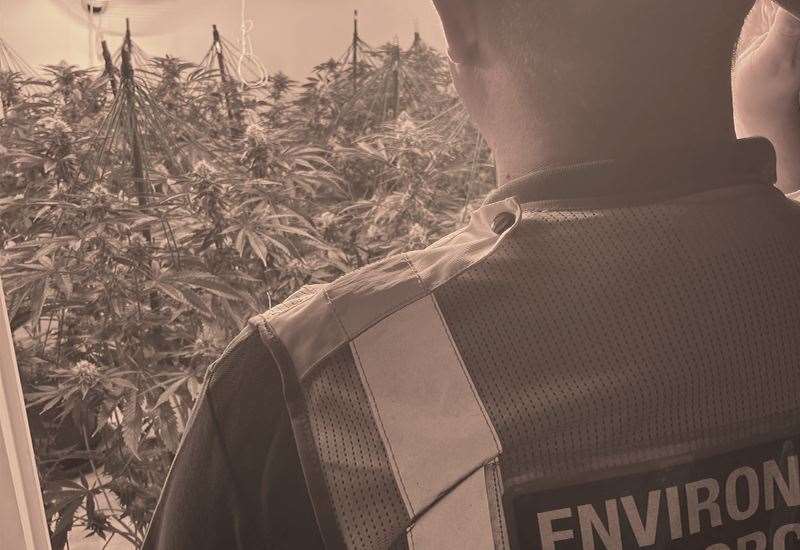 Around 160 cannabis plants were found growing in a property after a council investigated discarded bin bags.

In May, 30 bags of rubbish containing the remains of illegal cannabis cultivation were found by Gravesham’s Environmental Fraud Team in Batts Road, Luddesdown.

Investigations by the team led to an area in Chatham where the waste was believed to have originated, and details of a vehicle possibly involved in the breach.

Working with police, a warrant was executed at an address in Dunlin Drive, St Mary’s Island last Wednesday where around 160 cannabis plants were found growing in several rooms.

Cultivation waste was also found in the garage, awaiting another possible wild dump.

One person was arrested at the scene.

Following the operation, Cllr Shane Mochrie-Cox, Cabinet Member for Community and Recreation, said, “The rural areas of our borough suffer from a large number of incidents where waste from illegal cannabis cultivation are dumped.

“These often occur in isolated areas of natural beauty and have a serious impact on the environment and local communities as the dumped waste includes large amounts of contaminated compost, plastic and chemicals.

“Fly dumping is often linked to organized crime gangs, especially when it is a by-product of large-scale illegal cannabis cultivation, which is often undertaken by multinational organized crime groups who use properties under the guise of legitimate activities.Their activities often involve human trafficking and modern slavery.

“Crops involve the use of large amounts of electricity illegally taken from the power grid, often via dangerous cables, and there is always a risk of fire and serious risk to nearby properties.

“We will continue to work closely with our colleagues in Kent Police to tackle the production of illegal drugs and the resulting offences.”

He added that the law enforcement team attends to all reports of the spill of suspected cannabis crops, conducts thorough examinations and works with police when evidence is found.

Council and police investigations into this latest incident are continuing.

If you witness fly tipping or suspicious activity which may be linked to it, please contact Gravesham Council’s Environmental Law Enforcement Team via [email protected] or by calling 01474 337262.