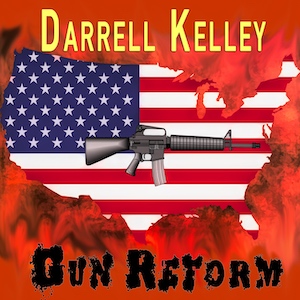 After the recent mass shootings, singer Darrell Kelley releases “Gun Reform” to wake people up to this ever-growing threat plaguing our country.

Darrell Kelley’s “Gun Reform” (released worldwide on Viral Records) picks up this battle cry against the NRA and the seemingly uncontrolled flow of automatic weapons into every corner of this country. Many in America now believe we have reached the tipping point of gun law reform. After recent massacres of unarmed citizens by armed assassins raged across the United States, most now conclude that enough is enough. And Kelley uses his lyrical skills to shoot from the hip with lines like “It’s hard to get a driver’s license and even an ID, but if you’re eighteen you can buy an AK15”, to speak truth to justice and call out the rampant madness that is sweeping this nation.

Following the launch of Darrell Kelley’s iconic “Insane In The Ukraine” last month, which pitted him against Russia and Vladimir Putin, the Boston, MA native is on the road again to share his message with people. . Currently, Kelley is in Buffalo, NY, participating in gun reform events with other artists and activists. “Gun reform” is the bell that needs to be rung for people to wake up to this ever-growing threat of gun violence plaguing the republic like a deadly lead poisoning epidemic.

This week, the single “Gun Reform” was submitted to all major digital and retail platforms. It is distributed worldwide by his record company to all major digital retailers and internet streaming platforms who have heard and joined his call to fight against this senseless violence. A North American radio and print campaign was also launched to promote “gun reform” and to spread the word about this travesty and threat not only to human life and property, but to our way of life. Mainstream Top 40, Mainstream R&B/Hip-Hop and Adult Contemporary format radio stations were served with the single. More personal appearances will be announced in the coming weeks. For more information, visit www.darrellkelleyofficial.com. An EPK is provided upon request to all members of the media by contacting the representative listed below.