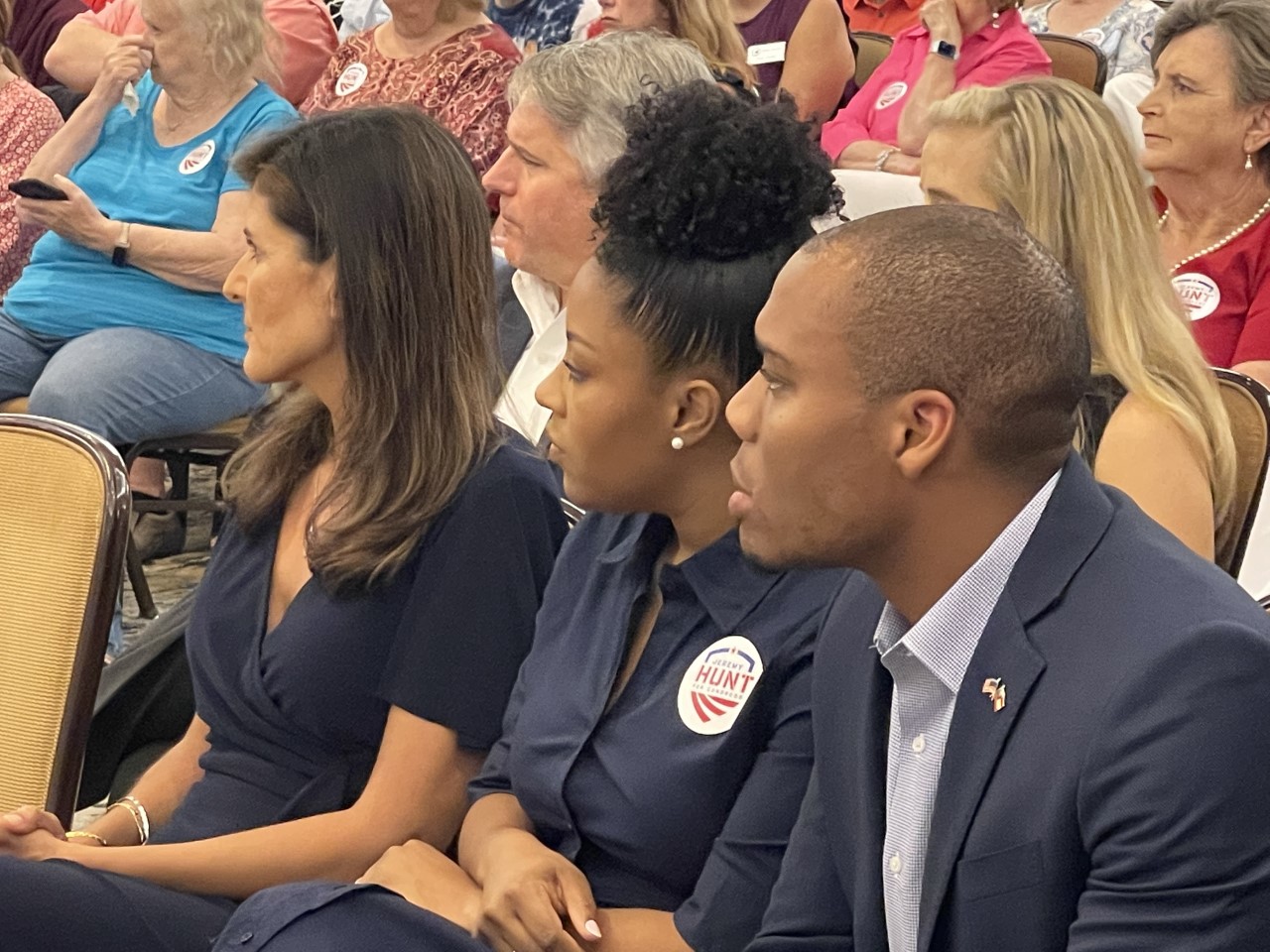 COLUMBUS, Georgia (WRBL) — As Tuesday’s runoff election in the Republican primary for the 2nd congressional district nears, a candidate and another who lost last month allege that Fox News Corp. attempts to determine the outcome of the Georgia race by offering airtime to one of the contestants to the exclusion of others.

Jeremy Hunt was the top vote-getter in May’s Republican primary and has made 15 appearances on Fox programming since Jan. 13, while his opponents have been essentially shut out by the network.

“They didn’t invite me to come on Fox News,” West told News 3 this week. “From someone who is from here, announced his candidacy in Thomasville, now we find ourselves in a second lap in a very tight race that a lot of people are paying attention to. And yet, Fox News… looks like they are trying, some would say, to put their finger on the scales.

Macon businessman Wayne Johnson finished third in the six-man primary and failed to qualify. He claims Fox News is trying to tip the scales.

“It’s not their fingers on the scales,” Johnson said. “They put a dump truck on the scale.”

Hunt declined to comment on News 3 for this story. News 3 attempted to get Hunt to comment on his relationship with Fox News via text message and an on-camera interview. Specific questions about that relationship were texted to Hunt and a campaign associate. Neither of them answered these questions.

A Fox News spokeswoman, Alexandria Coscia, responded to News 3 via email, saying Fox News had confirmed Jeremy Hunt had not been paid for any network appearances and appeared as a guest.

“We decline to comment on your additional questions,” Coscia said.

Hunt, 28, is a graduate of the US Military Academy at West Point. He served five years in the army, rising to the rank of captain.

After his military career, he enrolled in Yale University Law School. Hunt said in a debate this month that he had just finished his second year at Yale, doing his work online.

The winner of the Republican primary runoff will face entrenched Democratic Representative Sanford Bishop, who has held the seat for three decades.

After seeing Hunt appear six times on Fox News as a candidate for the 2nd congressional seat, Johnson complained to the network and its executives, CEO Suzanne Scott and Senior Executive Vice President Irena Briganti in a letter dated February 17.

He claimed the network was promoting Hunt for the seat.

“On several occasions, the Fox media organization and its program hosting talents have openly and actively promoted, in an apparently orchestrated manner between Fox’s respective media programming assets, Mr. Jeremy Hunt as a candidate in the United States House of Representatives from Georgia’s 2nd District,” Johnson wrote to Fox News executives.

The attempt to push Hunt was blatant and gave Hunt an advantage, Johnson claims.

“Programming presentations on Fox that include Mr. Hunt have intensely identified and advanced him as a candidate for Georgia’s 2nd congressional seat and have even gone so far as to endorse him for that seat and allow him to make direct and open requests for viewers to go to his fundraising websites,” Johnson wrote in the Feb. 17 letter.

After her complaint, Johnson appeared four days later briefly on Fox & Friends. It was his only appearance before the May 24 election. No other candidates from the 2nd congressional district were on the network during this race.

Two weeks before that election on May 11, Johnson registered another complaint in a letter to Scott, the CEO.

“On behalf of myself and other candidates running for congress in Georgia’s 2nd congressional district who comply with federal election law and FCC regulations, I must once again urge that Fox News , its various programs and hosting talents illegally abstain. for the benefit of Mr. Hunt and cooperatively violating federal campaign finance laws,” Johnson wrote to the CEO of Fox News.

Hunt continued to appear on the network despite Johnson’s objections.

“One was on election morning where Jeremy Hunt was front and center saying, ‘I’m running for Congress, come vote for me,'” Johnson told News 3.

West was supposed to be on Fox News in early March, but that appearance was canceled.

“I am very sorry, but unfortunately we are going to have to postpone due to the latest news in Russia and Ukraine,” wrote Fox News employee Nicole Croteau in a March 2 email to the West campaign. . “I’m really sorry and appreciate your understanding. We’ll be in touch.”

Stephen Lawson, a Republican campaign consultant working with West replied, “Okay, can we follow up next week? I just want to make sure we get it as soon as possible because it’s equal airtime with Jeremy Hunt…”

In late April, then early May, Lawson backtracked and received no response from the network.
In his first letter to Fox News, Johnson noted a trend in Hunt’s appearances.

This Feb. 9 segment began with a conversation about Black History Month and ended with Hunt giving a campaign speech.

“Obviously the overriding reason for Hunt appearing on this show with Mr. Kudlow was to promote his candidacy,” Johnson told Fox executives. “Just yesterday, February 16, Hunt tweeted that he was about to be on ‘@FoxNews with my friend @kilmeade’, which certainly indicates a ‘comfort’ and personal familiarity with Brian Kilmead.”

In that first letter to Fox, Johnson went so far as to call the network’s coverage of Hunt an “infomercial.”
“What’s happening sounds a lot like the Fox media-sponsored ‘Jeremy Hunt for Congress, Georgia’ infomercials,” he wrote. “This is, by any normal standard, unfair to me and the other candidates and may in fact be considered an illegal campaign contribution by Fox as a company, and even Fox’s hosting talent. It may also be determined to be an unlawful acceptance of campaign contributions by Hunt and Hunt’s Congressional Campaign.

Johnson tells News 3 that this story is hard to understand for someone who didn’t run in the 2nd Congressional District race.

“What happened with Fox’s commitment to supporting Jeremy Hunt is actually amazing,” Johnson said. “If I hadn’t directly engaged in the campaign process and witnessed it, I wouldn’t have believed it. But as a candidate, when you see repeated appearances from one of your opponents in mainstream media where he is allowed to show up and openly solicit money, it gets your attention.

“Including his announcement for his candidacy for Congress on January 13, Jeremy Hunt has been on Fox for at least 15 segments,” Johnson told News 3. “The total airtime for these segments is over 56 minutes. With Fox airtime at $50,000 per minute, that’s $2.8 million worth of free airtime for Jeremy Hunt.

And because of the on-air endorsements, Johnson argues the value for Hunt goes up.

“The real value of that airtime when coupled with on-air endorsements and positioning Hunt as an expert congressional candidate is ‘invaluable,'” Johnson said. “There’s no way I or Chris West or any of the other candidates can compete with that level of political propaganda.”

Hunt began his relationship with Fox News in 2016, while still on active duty in the US military. He wrote a series of articles which were published on Fox’s website.

One of his first Fox News appearances was in 2020 when he explained why, as a black man, he was not going to vote for Reverend Raphael Warnock, a black candidate running for the US Senate. in Georgia. Warnock won this race.