James Miller, 60, of Capel-le-Ferne, convicted of fly and litter dumping offenses in the Dover and Folkestone areas 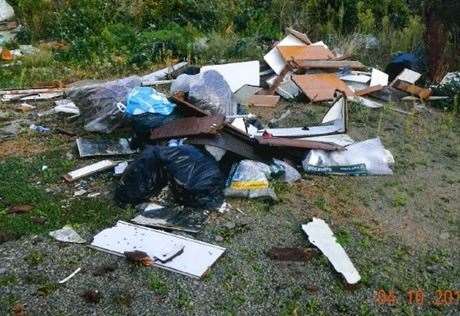 James Miller, 60, of Capel-le-Ferne, convicted of fly and litter dumping offenses in the Dover and Folkestone areas

A man has been left with a court bill of almost £1,800 after committing 13 offenses of dumping flies and litter.

James Miller must also complete 150 hours of unpaid work after his actions in the Dover and Folkestone areas.

Miller, 60, of Satmar Lane, Capel-le-Ferne, was convicted at Folkestone Magistrates’ Court last Friday after a prosecution by Dover District Council.

He previously pleaded guilty to three offenses of dumping waste, six offenses of failing to produce waste transfer slips and one offense of operating as an unlicensed scrap metal dealer.

He had been found guilty of three other fly-spilling offenses during a trial at Margate Magistrates’ Court on April 25.

Miller was also sentenced to an 18-month community order and 20-day rehabilitative activity requirement, plus ordered to pay £1,761 in costs.

He also received a Criminal Conduct Order, which prohibits him from collecting, transporting or transporting controlled waste, including scrap metal, from any home or business premises, which he does not own. or that he does not legally occupy.

It also prohibits him from approaching anyone at home or on company premises, other than his own, to solicit or offer to remove waste.

The council explained that on September 23 and October 3, 2019, fly dumping was reported ashore off Dolphin Passage, Dover.

A witness said he saw a red truck with “Jim Miller” written on it, dumping the waste.

On 4 October the same year, another incident of fly spilling was reported on land off Drop Redoubt Road, Dover.

A resident was found to have repeatedly paid Mr Miller to remove rubbish including wood panels, worktops, kitchen cabinets, a sofa, carpeting and glass doors.

On 6 and 25 October 2019 two fly dumping incidents were caught on CCTV on Dubris Close, Dover and both times litter was seen coming out of a red lorry with ‘Jim Miller’ written on it.

When questioned, Miller said he held a waste hauler license. He admitted picking up rubbish found at Dolphin Passage and Drop Redoubt Road, but said he had transferred it to another man whose details he did not know. He admitted leaving the waste at Dubris Close.

On March 23, 2021, a member of the public saw a large amount of litter on a road in Peene, near Folkestone.

Documents have been found relating to a company, which said it paid for the waste to be collected by Jim Miller.

The following day, a man was seen loading the rubbish into the van and driving off.

This was reported to Folkestone & Hythe District Council, who investigated and an image of the man involved was shown to the DDC, who confirmed it was James Miller.

Miller also received notices requiring the production of waste transfer notes, which he failed to provide on six occasions, according to DDC evidence.

Investigations have confirmed that between February 11 and May 24 last year, Miller sold scrap metal 82 times while not licensed to operate as a scrap metal dealer.

Scrap collectors as part of a business must hold a scrap collector license from the local authority in which they operate, even if they hold a waste hauler licence.