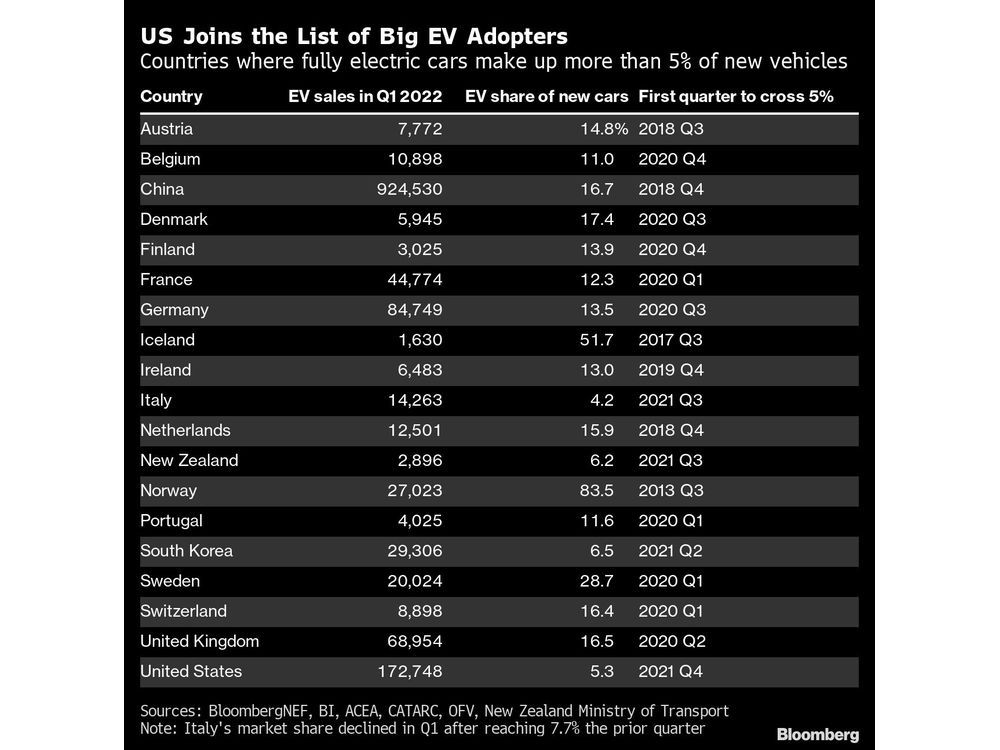 (Bloomberg) — Many older people remember the first time they held a smartphone. The devices were quirky and expensive and innovative enough to draw crowds at parties. Then, less than a decade later, it became unusual not to own one.

That same societal shift is now happening with electric vehicles, according to a Bloomberg analysis of global adoption rates. The United States is the latest country to pass what has become a critical tipping point for electric vehicles: 5% of new car sales powered solely by electricity. This threshold signals the start of mass adoption of EVs, the period when technology preferences are changing rapidly, according to the analysis.

It makes sense that countries around the world follow similar patterns of EV adoption. Most barriers are universal: there aren’t enough public charging stations, cars are expensive and in short supply, buyers don’t know much about them. Once the road has been paved for the first 5%, the masses soon follow.

Thus the adoption curve followed by South Korea from 2021 ends up looking very similar to that taken by China in 2018, which is similar to Norway after its first quarter at 5% in 2013. The next major automotive markets approaching the tipping point this year include Canada, Australia and Spain.

The analysis above is for vehicles that run on batteries only. Some countries, mainly in Europe, have been quicker to adopt plug-in hybrids, which have smaller batteries backed by a gasoline engine. Including these, the world just passed 20 million electric vehicles on the road, and that figure will double again by the end of next year, according to a recent report from analysts BloombergNEF.

Behind every country that has gone through an EV tipping point is a program of federal incentives and pollution standards. In the United States, the Biden administration issued an executive order last year calling for electric vehicles to make up half of new vehicles by 2030 (including plug-in hybrids). According to tipping point analysis, it should beat that target with several years to spare.

The graph below does not include Toyota, which is the largest automaker that has not reached the 10% EV threshold in Europe. Toyota’s target of 3.5 million annual electric vehicle sales by 2030, as a percentage of its 10 million annual vehicle sales, is one of the least aggressive of the major automakers. The chart also does not include Tesla, the world’s largest electric vehicle maker, whose sales are all-electric.

Until now, 90% of global electric vehicle sales have come from the United States, China and Europe. This means that the countries responsible for around a third of annual global auto sales have not passed the tipping point. None of the countries in Latin America, Africa or Southeast Asia has taken the plunge. If they do, it is uncertain whether global miners will be able to meet the demand for battery metals.

Yet global electric vehicle sales have tripled in the past two years, according to the International Energy Agency. All of the net growth in global car sales in 2021 has come from electric cars, and it’s a trend that BloobmergNEF predicts will continue indefinitely. This year could be the high water mark for vehicles on the road without a plug.

Sign up to receive the best daily stories from the Financial Post, a division of Postmedia Network Inc.

A welcome email is on the way. If you don’t see it, please check your spam folder.

The next issue of Financial Post Top Stories will soon be in your inbox.